I don’t manage to keep much track of what I read but here’s a few of the books I read towards the end of last year.

I did read some new stuff too

I found an interesting reading challenge that doesn’t seem too arduous. 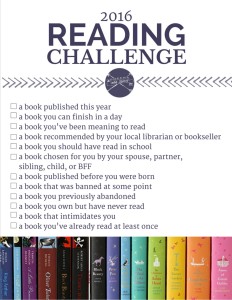 In order to make this a little more interesting, I’m going to stipulate no re-reads except the final category and the partial re-read for the abandoned category. I wonder how long it will take.