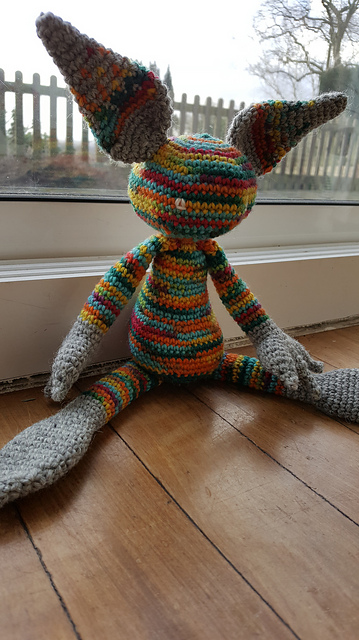 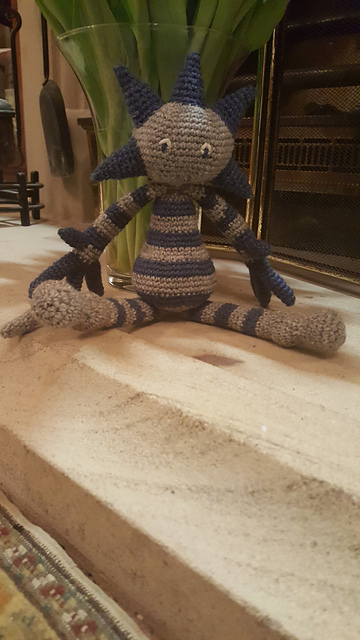 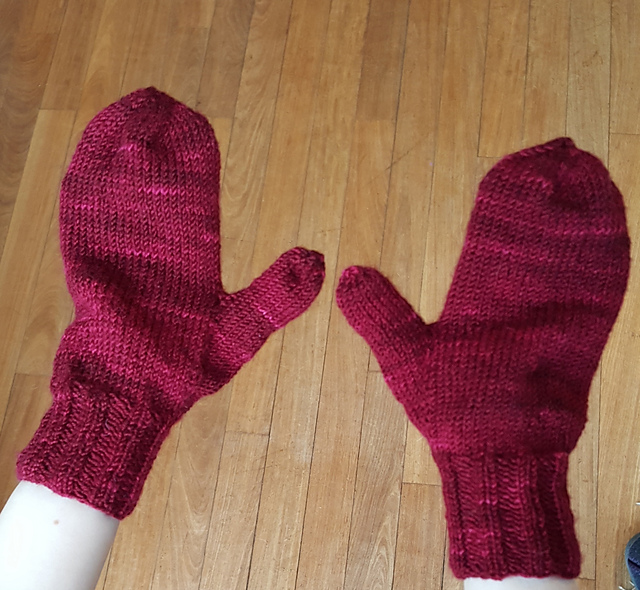 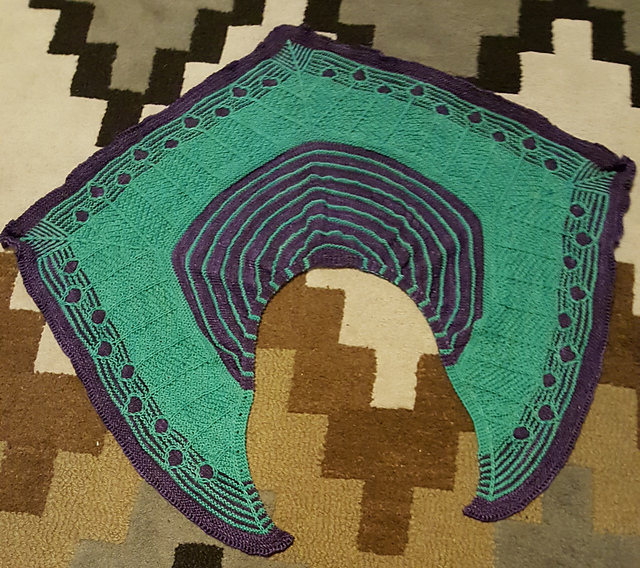 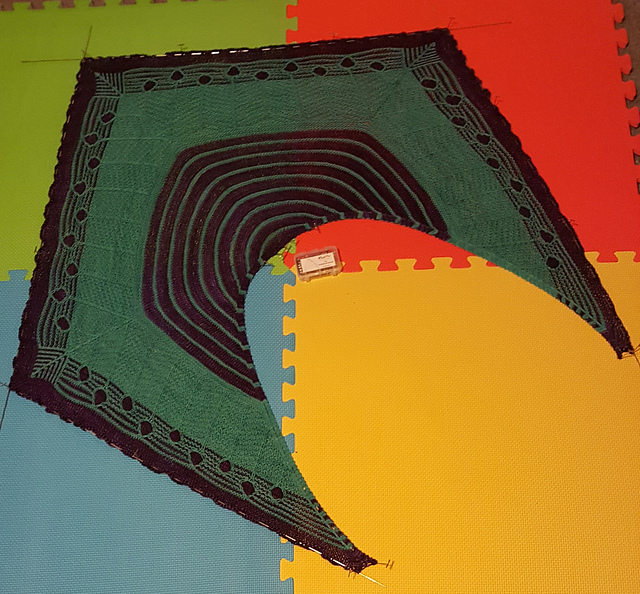 The last time I posted a project round-up, I had met my target of 12 projects complete in 2017. Here’s what happened next: 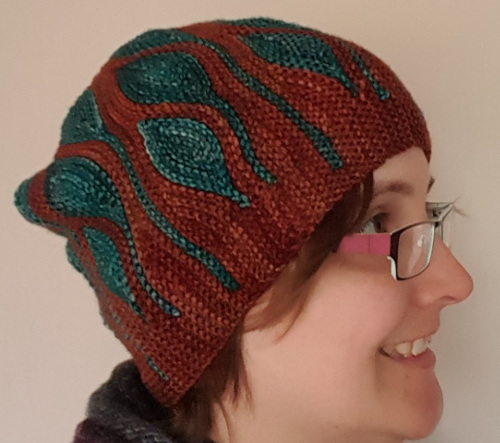 I’m tending to wear it with the brim tucked underneath for about an inch, which makes it warmer round the ears and fits better at the crown.

I finished the Hilltop Cloud fibre. 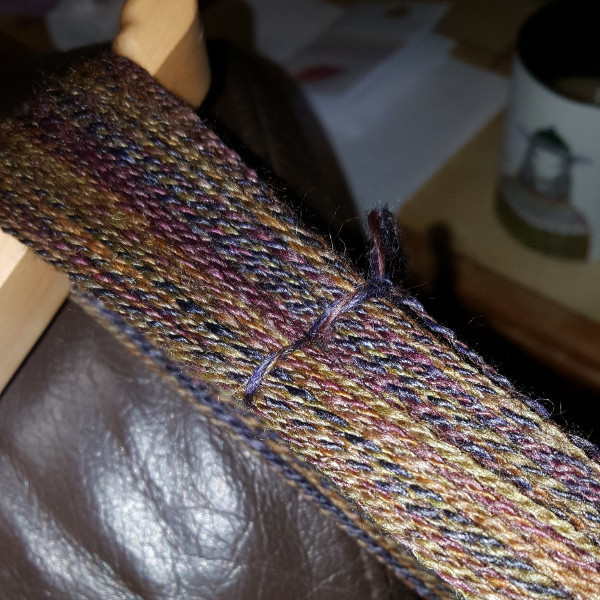 Very happy with the colours here. Can’t wait to see what it knits up into. I think it’s about a DK weight.

And finally, the kids’ Christmas presents, which were presented to them on New Year’s Eve. The daughter knew all about the son’s toy as she had seen me making it. The son knew about the daughter’s. They were both very chuffed with the creatures. 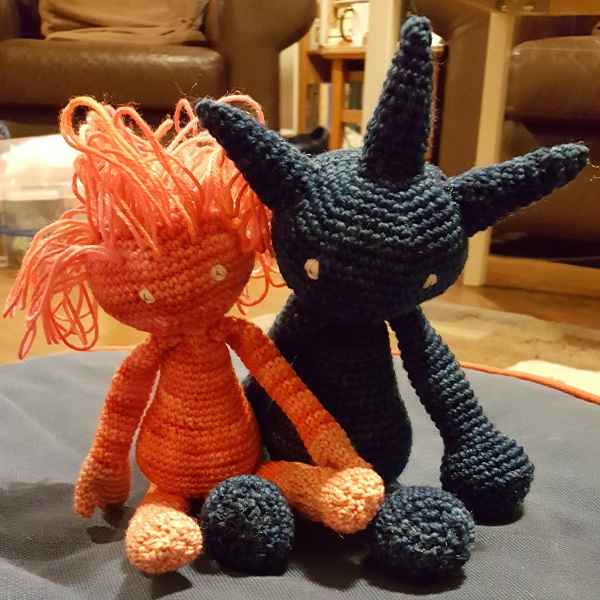 The one on the left was named Bella by the recipient and was immediately promoted to a must-have bedtime companion. I wasn’t done with making these creatures. More to come in 2018.

Looking back, I can see that I talked about the Masham fibre that I spun, but never showed a picture.  Here it is. 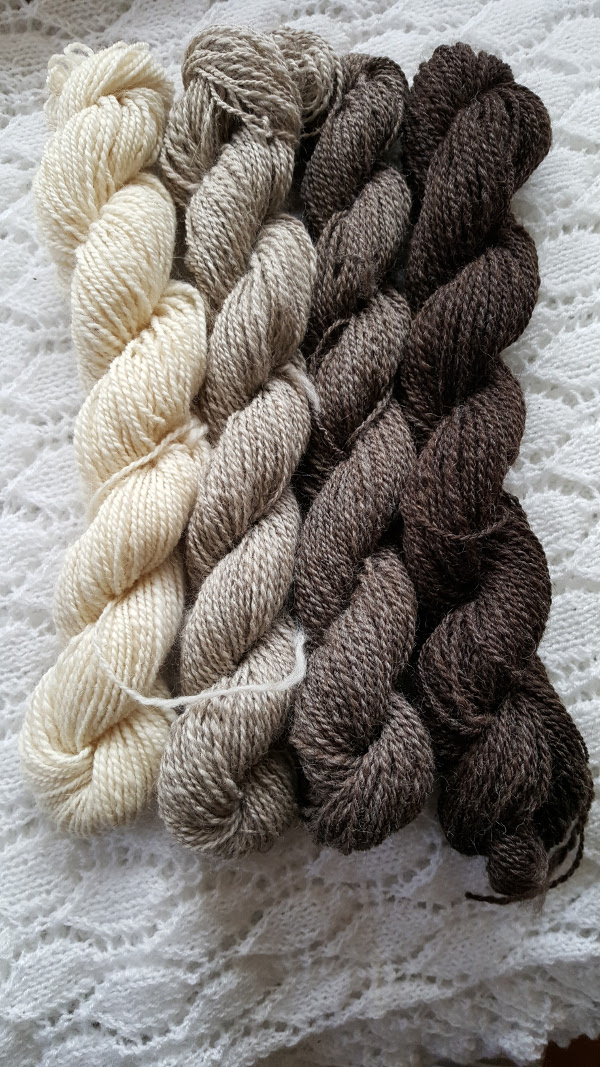 I think that brings 2017 crafting to a close.

Did I meet my goals?

I’m going to call that a successful year.

Last summer, we had a family trip to Herefordshire. We stayed in a yurt on a farm, did various trips out and had a really good week. The daughter spent the whole time bugging the farmer to let her help clean out the animal pens, while the son spent most of the time reading. With that in mind, it was clearly time for a trip to Hay-on-Wye, the town of books.

DH is familiar with Hay-on-Wye, having accompanied me there on several previous occasions. He’s quietly resigned to not seeing much of me for the day and taking himself off to cafes at appropriate intervals. The question was, how would the kids react? Were they really old enough to appreciate Hay?

The daughter, aged 5 at the time, was not really into the whole second-hand book thing. She was intrigued in the first couple of shops, then spent the rest of the day saying things like “not another bookshop”. The son, on the other hand, seemed to be delighted by the whole experience.  He came away with quite a pile of books and would, I think, have happily carried on with the browsing and buying for a few more days, particularly as I gave him extra book-buying money. 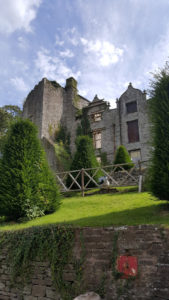 It had been about ten years since I last went to Hay.  My impression is that the town has become a little more commercial. The shabby bookshops are not so shabby, everything seems a lot more organised and there’s more crossover between old and new books in the shops. It will be interesting to see what happens with the castle once the crowd-funded refurbishment has been completed.

Some things haven’t changed. The honesty bookshop is still there, still without any books I have any inclination to read.

The books I ended up getting have all been sitting on my desk for six months, waiting for me to get round to writing this post. Of course, I’m now writing this upstairs so I need to go and fetch them. 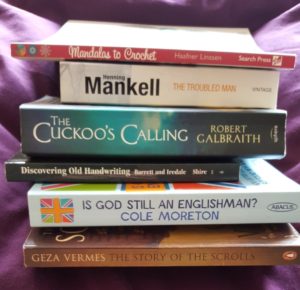 Hay did not seem to have a good selection of craft books. I was disappointed not to find more knitting books. I was prepared to wade through vast quantities of vile eighties intarsia sweater books to find some gems. I wasn’t really prepared to find almost nothing. The only one I found that was worth getting was Mandalas to Crochet by Haafner Linssen. I haven’t made anything from it yet, but I do like the idea of crocheted circles so I probably will at some point. The diagrams are particularly clear and the maths is quite intriguing.

I tend to pick up Henning Mankell books when I find them cheap. Scandi Noir, without being too noir. The Robert Galbraith is another one on my list of detective novels to try: Galbraith, of course, being an alias of Rowling.

Discovering Old Handwriting is one of those books that leapt off the shelf at me. It could come in handy for work if I’m ever looking at old archives, but I really bought it as it adds to my general interest in handwriting.

Rounding off the selection are a couple of theological books, neither of which I’ve done more than glance at since buying them.

I was particularly happy to discover a stationery shop in Hay, called Bartrums. Here’s the haul from this shop.

I’ve read so much about the Palomino Blackwing pencil. Online, it only seems to be sold in packs of 24, which is quite an investment to make for something that might not be to my taste. I was able to buy a single pencil, which has now been in circulation for a while. It’s a good pencil, very smooth both to touch and write with. Is it worth the price-tag? I’m still not sure. I’ll probably stay with my trusty yellow and black Staedtlers with the red end, which I’ve been using as long as I’ve been writing.

I’ve taken to picking up washi tape when I find it. It always comes in handy. It seems I had a bit of an olive green thing going on that day, as I came back with olive green washi tape and Vert Olive ink from J Herbin. My Lamy Safari is currently using the ink. Now I have got used to the colour being lighter than I expected, I like it.

I’m out of the habit of blogging.  There are a few drafts kicking around in the list of posts that I haven’t finished, plus a whole lot more posts that have never got beyond the mental note of oh, that would make a good topic. I even have a few piles of books and knitting stuff waiting to be blogged. There’s one pile of books on my desk that is really getting in the way, so that has to stop.

Last week I spent a good chunk of a day catching up on what I’ve been wanting to write about so that I can make a fresh start. Delving into my knitting and reading gave me enough of a break from work so that I could be refreshed and ready for the marathon of the Easter weekend.

All that’s needed now is to remember to click publish on posts before they get completely out of date.  Yes, I had to redraft all the tenses in that preceding paragraph as I didn’t actually publish, despite having written that.

In brief: knitting continues, reading is still a constant part of life. Oh, and I’ve done some new things with my sleep patterns that have had some profound effects.

You’ll find my instagram as a widget on the sidebar. I like the format of choosing a picture and having something to say about it, so I’m using that when perhaps in the past I would have thought about blogging.