The Ysolda knitalong from January you say? It went quite well. There were five clues, each with two options, so you could end up with one of 32 different shawls.

Here’s mine, ravelled here, and being worn pretty much every day now the winter has started to bite. 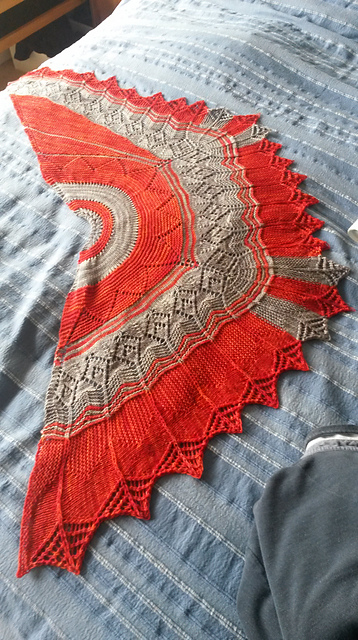 It’s a peculiarly vibrant red, that I love, although it’s nowhere near the colour palette I usually inhabit.

There were dramas in the knitting. I ran about three yards short of the red yarn, so had to redo almost the entire knitted on border to insert the grey panels. There was swearing that evening.

Since then, I made an attempt at Sock Madness in March, but only reached round 2. It’s a lovely group to be part of, but I think that sock-knitting contests are something I’m going to step away from for a while.  There are exceptions of course: I still love Sock Sniper. I got my kill this year, but was taken out within an hour of returning from the post-office. There’s so much I want to knit in order to learn more and the structured Knit-a-longs often don’t have patterns that challenge or inspire at the time.

In the spring I made a foolish error: I committed myself to knitting a pair of socks for a charity auction. The lot went for a good amount of money, but ended up being bought by a man. I had intended to specify that they were ladies socks in the catalogue, but I missed out on checking the entry. I’m committed to knitting a really big pair of socks and I’m no longer enjoying it. The design process has been interesting – this is the first pair of longer socks I’ve had a go at – but the actual knitting is fairly soul-destroying, even with some sneaky cables and a bit of gansey-type patterning. Still, it has to be done. Surely if I keep knitting they will eventually be finished. I’m keeping away from all sorts of lovely yarny distractions until they are done and in the post.

I’ve a few posts in mind to ease me back into the idea of blogging:

My life is rather unbalanced at the moment. Too much work and not enough knitting, or thinking and writing about knitting. This must change. I’ve been putting some support systems in place at work to help me work more effectively. I need to do the same for play as well.

This evening I will leave it here I think. How was your summer? Knit anything nice?

[edited for spellings and to insert a link]