I’ve discovered mattress stitch, or as June Hemmons Hiatt (in the enormous brick that is The Principles of Knitting) has it, running thread seam. The main annoying thing about that book is that she refuses to use common parlance, in favour of renaming almost everything. What is worse, is that the index then becomes less than helpful, other than as a general direction to the relevant chapter.

Anyway, I’ve discovered mattress stitch. I may be some time. Despite the main body of my son’s birthday sweater being knit in one piece, there are a lot of seams to sew. 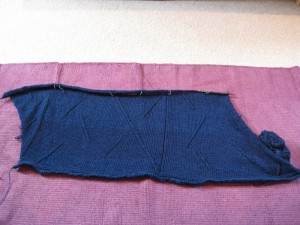 I’ve made a lot of progress on the cotton sweater for my son. The main body is done and I’m 20 rows from the end of the first sleeve. Sadly, one ball of yarn was not sufficient for the sleeve, so I’m waiting for an extra ball to arrive. The picture is of the main body up to just before the split for the armholes. I’m finding that knitting with cotton for long periods of time is quite tiring on the hands, particularly the left hand, so I’m taking a break for a couple of days.

The new WIP are some socks for a friend who has a lot of pain in her feet. We’ve talked a lot about how socks need to be constructed for her, so I’m hoping these will help. We settled on a toe-up construction with plain foot, reinforced flap and gusset and a lovely cabled pattern on the leg. So far I have a toe. 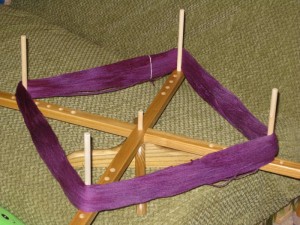 Oh, and I mentioned a parcel in the post that would help an aspect of knitting go more swiftly…

This is the yarn for the socks, from Violet Green in colourway Lavendular.

The lurgy has hit us all big-time, so knitting isn’t going as quickly as it might. Hopefully things will be back to normal shortly.

I’m knitting away on my son’s birthday sweater. Nearly finished the main body up to the armholes. This evening I want to get most of the neck shaping done, so this will be a very brief post. My hands are constantly dyed blue from the indigo leaking off the Rowan Denim. Thankfully, soap tends to get rid of most of it.

I’ve taken pictures, but they are downstairs on the camera. Later in the week…

In other news: I was reading the footnotes of my BIG book of knitting (see prev. post) and discovered a book called The History of Hand Knitting by Richard Rutt. I ordered it through the library and I’m now browsing through it. I was intrigued to discover that Richard Rutt was the Bishop of Leicester. I knew there was a knitting bishop, but I didn’t know he’d written about it. I really must work on making sure that knitting can be partly counted as work in the future. I’ve a few ideas, but they aren’t totally formed yet.

Turning the computer off and heading downstairs to knit.

In the midst of Knitting and Crochet Blog Week it was my birthday. Since the blogging topics for last week didn’t really include a “jump up and down and shout about all the nice stuff you have” topic, I thought I’d wait until this week to catch up. Mr H is away in Sheffield watching the Snooker World Championships and having a well earned few days away from the little people (we think this is only the second time in 3 years that he has gone away for a night without us), so I’m having a nice, relaxing evening of catching up on Mad Men and knitting. 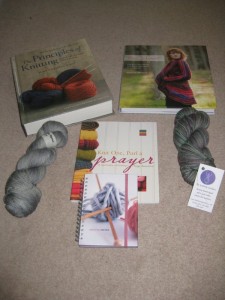 I had made a very knitting-focussed wish-list for my birthday, so it is no surprise really that there is a lot to blog about.

Firstly, my lovely children (aided by Mr H, I suspect) bought me The Principles of Knitting, 2nd edition. The first edition of this has been selling for hundreds of pounds/dollars on book sites, since it has been out of print for years. The second edition has been thoroughly revised and updated. Although it is a reference book, I think it bears reading from cover to cover. I’m on page 27 of 712, so it may take a while. The first chapter was all about how to hold the knitting needles. June (author) recommends that you learn at least 3 different ways to hold the needles and yarn so that, in the event of injury, you have a different method to fall back on. According to the book, I hold the needles according to the ‘parlor method’, a hold adapted by Victorian ladies from those using a knitting belt, but without the need for wearing unladylike knitting gadgets! I’m fairly sure that my hold developed from being more used to crocheting and feeling comfortable with having the right hand knitting needle resting in the gap between thumb and forefinger. I’m sure there will be more to write about as I get further along.

The last book (thank you parents-in-law) is Knit, Swirl. This is a book of patterns for a distinctive, circular construction of cardigan/jacket. Knit from the outside in, and based on either a circle or an oval, there are only four constructions, but many interpretations of the idea of a ‘swirl’. I am very much looking forward to getting the yarn to make one of these, but I may need some help choosing!

There are also two skeins of yarn in the picture: some grey Smoothie Sock from Artisan Yarns and some purpley-green Knitting Goddess sock yarn. The latter was added to an order I made a while back and hidden by Mr H until now. It is dyed using a double-dipping method, so I’m very interested to see how it works out.

The final item in the picture is a knitting notebook from my lovely sister. I think this may well become my travelling journal for keeping track of ongoing projects and decisions made.

The next month is going to be a busy one as far as knitting is concerned. I’m trying to get my son’s SK8R jumper finished and knit a promised pair of socks for a friend by the end of May. 1st June sees the start of Tour de Sock, the six-round speed sock-knitting tournament. I’d better get back to the needles.

Oh and just one more thing before I go – there is a very exciting parcel in the post to me at the moment, that will make one aspect of my knitting go much more swiftly, I hope!