September the 1st is a fixture in my calendar: Sock Sniper begins. I’ve already written a little, but wasn’t able to disclose much in my last post. My heart sank when I discovered I had a Canadian target. This would be the year I discovered the truth of whether Canada Post lives up to its reputation.

My socks were completed on September 4th and posted on September 5th. The made landfall in Canada on September 9th, but didn’t reach their destination until the 24th. I believe it was Canadian customs, rather than Canada Post itself that was the real culprit, but it was infuriating to watch the tracking websites show no update for weeks on end.

My death came at the hands of yogaknot on September 24th as well.

In between posting and receiving death socks, I busied myself with a secret project that I must get round to posting to France. Then I decided that I really should do some serious work on one of my long-term WIPs.

The sock yarn blanket scarf has been on the needles for 5 years. It made steady progress until it became too big to carry around in a bag and work on during meetings. Every so often, usually for the olympics, I would set a target of knitting a handful of squares. Looking back at photos, I can see that it reached the designated halfway point before February this year, then I realised that there were ‘only’ about 70 squares left to knit and it sounded achievable.  By mid-September I decided that I wanted to wear it to Yarndale, so I knuckled down and knitted as much as possible. In the last few days leading up to Yarndale I had about 40 squares left to do, plus the applied i-cord border to knit and the ends to sew in from the last few sessions.

I called time on the project at midnight the evening before Yarndale. All the squares were knitted, all the ends were sewn in, but there were still about 14 edge squares without a border. So close. I took it to Yarndale anyway, where I showed it to Joy at The Knitting Goddess, since it is approximately 50% her yarn.  She liked it (and you may see some of these pictures on her blog in the next week or two). I’m keeping the rest of the Yarndale stuff for another post.

After a few days, I finished the final bit of the edging and took it outside for some beauty shots.

This, then, is a history of my sock-knitting up until now. It contains at least one square from every sock (or glove) I have ever knitted. It began only 3 years into my knitting career, when I was concerned that my sock-yarn scraps were getting out of hand. With hindsight, I can see they weren’t out of hand at all. At that time I had knitted only 7 pairs of socks and 2 pairs of gloves. Now, it is well over 50 pairs, so there’s a little more variation as it gets up the blanket.

The question remains: will I actually wear it? It’s a little cumbersome for regular wear, but it is lovely wrapped around the shoulders in the evenings.

Now, of course, I need another sock yarn scrap project. I’m not going to do another of these exactly the same because it lost its usefulness as a travelling project when it got too big.  Perhaps I will make squares of about 25 little squares joined together, then seam them all into a bigger item.

A friend (and blog-reader – Hi Daisy) has a rather large bump, so I need to knit something for her. Are you bothered about it being a surprise, or would you like to see it growing? I have yarn and a plan.

Perhaps it is time to bite the bullet and make some knee-high socks. I now have three pairs of skeins set aside for knee-highs. I’ve even bought a nice dress for work that might go with them.

What have I been reading?

The state of the stash

Thanks to Ravelry, I can look at how much I have quite easily. Last time I did a stash inventory in 2013, I had 8.67kg of yarn. Looks like I’ve been remarkably consistent and only added less than 150g of yarn since then. This is not quite true: I’ve just gone through and excluded all my scraps and leftover balls from my stash, thus bringing down the totals considerably. When it comes to yardage, I’ve added about 2 miles of yarn to the stash. (When I did this round-up in 2013, I converted all the distances to Miles, chains, yards and feet. Can’t be bothered to do that today, so an approximation will have to do).

Seems a long time since Sock Sniper started, and indeed it is 2 months. Things got quite tense in the last weeks. I had no idea where my third pair of socks to finish were coming from and it was weeks before they arrived. By that point we were down to the final three: me and two Americans. The day the socks arrived, I heard on the forums that the socks knitted for me had been posted, so there wasn’t a moment to lose. The person who had started the socks had only knitted the first leg, so there was a fair bit left to do.

How fast can I knit a sock and a half? Well, I started at 11pm on Wednesday evening, knitted for an hour, then went to bed. On Thursday, I knitted all day (apart from feeding the children) and kitchenered the toe at 2.30am on Friday. They went in the post on Friday morning and I went home to rest my eyes and hands. 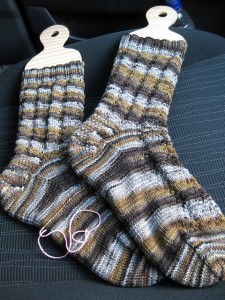 This week I got back from a few days away, fully expecting to have been ‘killed’, but the socks didn’t arrive until Friday morning, the same day as the socks I knitted arrived in Louisiana, USA. I was killed 5 or 6 hours before the other person, but it was called as a tie by our commander in chief, since it was the same postal day. Cue much rejoicing. Now I am waiting eagerly for the prize to arrive. People keep asking me what I am going to do with 20 skeins of sock yarn. I’m guessing there will be a few people with warmer feet over the next few years. I wonder what else I can knit with sock yarn?

When you get a lovely prize like this I think it is nice to share. So, leave a comment saying what you have done to deserve a free skein of sock yarn and in a few weeks (when the yarns have arrived in the post), I’ll choose the comment that amused or touched me most and post you a skein of yarn.

Do you want to see the socks that killed me? 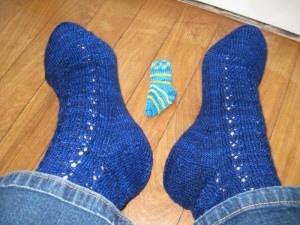 Aren’t they a glorious colour?

I must figure out sometime just how many pairs of socks I’ve knitted and sent round the world. It’s quite a few now.

Tomorrow is one of my favourite times of the knitting year. Sock Sniper begins and I (hopefully, if all goes to plan) get to kill someone with a pair of socks.

I didn’t get the orange cabled socks done in time, but one of them is finished, so the needles are free. I was getting impatient to start, so I did some swatching. It got a little out of hand. 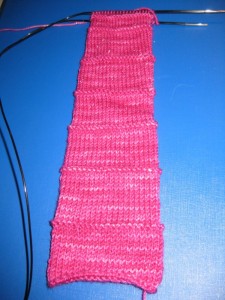 I’ve tried every size of sock needle I have from 3.25m down to 1.5mm. The weapons this year need to adhere strictly to gauge and there are a variety of gauges to match. I will probably not be going for the 9.5 stitches to the inch socks.

I’m off to get a good night’s sleep (children permitting) ready to cast on after work tomorrow afternoon.

In other news, I have got a ticket to Yarndale at the end of September, and a day’s knitting course with Amy Singer of Knitty. Woo hoo!

P.S. If my sniper is stalking me, welcome to my blog. Please do leave a comment. I look forward to hearing from you (in a while).

My death socks arrived last week. Here is the report:

Further to the reports of a sudden death last week, the investigation is now able to release some details. The crime was committed using the Moss Rock Socks pattern, and Ranco by Araucania. 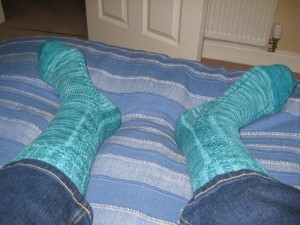 Due to recent cuts in funding for the local police, they were reduced to outlining the crime scene using the only materials available. 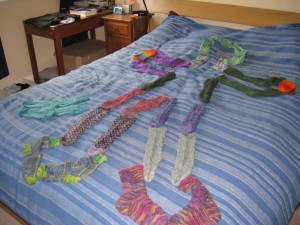 The final words of the deceased are reported to have been “Wow – gorgeous socks, ravelry swag and Hershey’s too”. 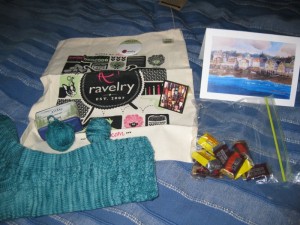 Enquiries are being made as to the true identity of ‘drgnldy’.

The investigators have released pictures of some of the grieving family, as a lesson to all those messing with dangerous weapons. 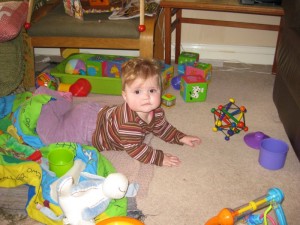