Rather than repeating the list of reading aims for the year each time, I have built a page that I can keep updated throughout the year.

There are probably more books that I have read or re-read since January, but I haven’t been keeping a very effective list. This is just what I can find from my various electronic devices and from looking around.

Borrowed from the library

My local library is closing for refurbishment in a week or two, after which it will reopen as a volunteer-run library. I overheard the librarian this afternoon explaining that she will shortly be out of a job. Such short-sighted policy from the government, taking so much local authority budget away that they have no choice but to cut library staff. It’s fine for our local town as there is a small army of active retired people there. I can foresee in other places it will be incredibly difficult to recruit enough volunteers. Plus, what does it say to people wanting to become professional librarians if it is implied that anyone can do this with willingness and a couple of hours training. The rate that our kids get through books, we would be stony broke if it wasn’t for the library. I like to think that my library fines, however small, are helping in some way to keep it going! Yes, that’s why I don’t take the books back on time, nothing to do with always forgetting to write down the due-date in my diary.

On my bedside table, but not started yet

When I first started blogging here, one of the things I intended to do was to keep track of where I found mentions of knitting in literature. I even have a special category of posts just for this. Perhaps I’ve been knitting more than I’ve been reading because I haven’t really found many… until now.

Thursday (the book’s heroine) is returning to her fictional residence inside the story of a book. N.B. Pickwick is a dodo.

It felt as much like home as it had ever done. I kicked off my shoes and flopped on the sofa next to Gran, who had fallen asleep over a sock she was knitting. It was already a good twelve feet long, because, she said, ‘she had yet to build up enough courage to turn the heel’.

I closed my eyes for a moment and fell fast asleep without the nagging fear of Aornis, and it was nearly ten when I awoke. But I didn’t wake naturally – Pickwick was tugging at the corner of my dress.

‘Not now, Pickers,’ I mumbled sleepily, trying to turn over and nearly impaling myself on a knitting needle.

Doesn’t she realize that turning the heel is the best bit?

I do recommend Jasper Fforde’s writing. Start with The Eyre Affair to read the beginning of Thursday’s chronicles. If you like reading literature and are not averse to fantasy, I’m sure you’ll enjoy them.

I’ve discovered the yarn along on the blog Small Things, so I thought I’d join in this week.

Here is my picture of what I am reading and knitting. 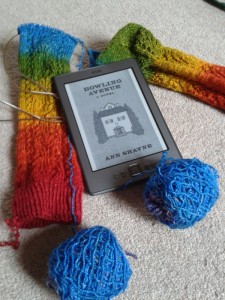 The socks are still the stage 1 socks from Tour de Sock, although you can see some progress from the last post. I’m now up to the blue, so the end of the rainbow is in sight. I’ve switched back to two at a time for the last bit so I don’t have to worry about whether the feet are the same length. I’m a little concerned that the yarn will run out before they are long enough, but I think I will be able to use the deep purple yarn from the Calable socks to do the toes if necessary.

The book is Bowling Avenue by Ann Shayne (of Mason-Dixon Knitting), a novel set during the Nashville floods a few years ago. Strictly speaking, I’ve already finished reading this, but it was such a good book that I wanted to recommend it. There is a tremendous sense of place in the novel, and I found the characters, particularly the main character, really interesting. Can’t beat having a knitting sub-plot as well! I’m sure that a picture of the book I am reading would be a lot better if I wasn’t reading it on the kindle. Ah well.

This evening it is a meeting of Deanery Synod. This is one of the meetings where I take my knitting along and actually do knit through it. The trick with knitting two socks at once is to wear a cardigan or jacket with pockets and keep one ball of yarn in each side.

As promised, here are the knitting quotes from Little Women. They are taken from the Kindle edition, which also contains Good Wives in the same volume.

The first one, from the very beginning: page 4

It’s bad enough to be a girl, anyway, when I like boy’s games and work and manners! I can’t get over my disappointment in not being a boy. And it’s worse than ever now, for I’m dying to go and fight with Papa. And I can only stay home and knit, like a poky old woman!” And Jo shook the blue army sock till the needles rattled like castanets, and her ball bounded across the room.

Knitting is used here as a way of establishing Jo’s character. Disappointing use of the knitting is for old women stereotype.

Now one about Beth (the good one) knitting socks: page 13

Beth said nothing, but wiped away her tears with the blue army sock and began to knit with all her might, losing no time in doing the duty that lay nearest her, while she resolved in her quiet little soul to be all that Father hoped to find her when the year brought round the happy coming home.

What a contrast between Beth and Jo. Is knitting with all ones might more effective, I wonder?

“Then you may come, and I’ll teach you to knit as the Scotchmen do. There’s a demand for socks just now,” added Jo, waving hers like a big blue worsted banner as they parted at the gate.

I wonder what ‘worsted’ means in this context. Can it mean the weight of yarn, as used currently? Seems unlikely for socks, since they would be rather bulky and impractical for Army use. Maybe it is referring to the spinning method. Any ideas?

And finally a longer quote from right at the end of Good Wives: page 329

But Jo had her own eyes to take care of, and feeling that they could not be trusted, she prudently kept them on the little sock she was knitting, like a model maiden aunt. A stealthy glance now and then refreshed her like sips of fresh water after a dusty walk, for the sidelong peeps showed her several propitious omens. Mr. Bhaer’s face had lost the absent-minded expression, and looked all alive with interest in the present moment, actually young and handsome, she thought, forgetting to compare him with Laurie, as she usually did strange men, to their great detriment. Then he seemed quite inspired, though the burial customs of the ancients, to which the conversation had strayed, might not be considered an exhilarating topic. Jo quite glowed with triumph when Teddy got quenched in an argument, and thought to herself, as she watched her father’s absorbed face, “How he would enjoy having such a man as my Professor to talk with every day!” Lastly, Mr. Bhaer was dressed in a new suit of black, which made him look more like a gentleman than ever. His bushy hair had been cut and smoothly brushed, but didn’t stay in order long, for in exciting moments, he rumpled it up in the droll way he used to do, and Jo liked it rampantly erect better than flat, because she thought it gave his fine forehead a Jove-like aspect. Poor Jo, how she did glorify that plain man, as she sat knitting away so quietly, yet letting nothing escape her, not even the fact that Mr. Bhaer actually had gold sleeve-buttons in his immaculate wristbands. “Dear old fellow! He couldn’t have got himself up with more care if he’d been going a-wooing,” said Jo to herself, and then a sudden thought born of the words made her blush so dreadfully that she had to drop her ball, and go down after it to hide her face. The maneuver did not succeed as well as she expected, however, for though just in the act of setting fire to a funeral pyre, the Professor dropped his torch, metaphorically speaking, and made a dive after the little blue ball.

What a contrast in Jo’s attitude from the beginning of the book. Love the idea of knitting being used to hide inconvenient facial expressions. Similar to the trick of bending down to pick up a pen to avoid falling asleep during boring lectures.

In other news: the cardigan is still not dry. Maybe I shouldn’t have wet it quite so thoroughly.