Yarndale is usually the highlight of my knitting year: all my favourite websites and blogs come to life. All the yarns I know only by name can be felt as well as seen. Yarndale this year was excellent (apart from the queueing – despite having advance tickets, we queued for nearly an hour).

Once inside, it was a feast for the senses. So much colour, a few fibre animals enjoying the attentions of passers by, and much spotting of amazing creations. People seemed to have thought as I did – going to a yarn festival means wearing the yarny creation you are most proud of (I wore my Knit your Arrow 2 shawl) . My friend and I spent much of the day shamelessly commenting on the scarves and shawls and jumpers that were on display, like a constant fashion show. Each tea break meant sitting where we could see people queuing and playing guess the pattern.

This year was the first time I kept within budget  – only spending what I had in my wallet – although I only managed this because I discovered I had more cash in my wallet than I had at first thought.

Here’s the haul.  Quite restrained. 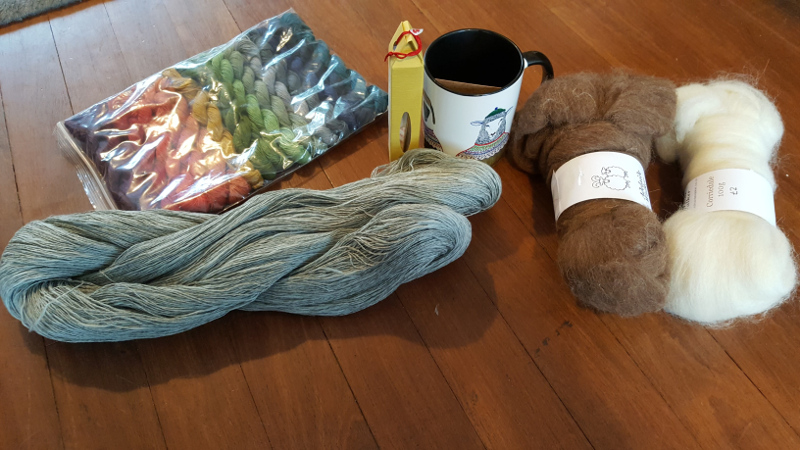 There’s some beautiful neutral linen, plus a whole set of linen mini-skeins. Corriedale and Manx Loughtan fibre, some new tapestry needles in the most beautiful packaging ever and a Scheepes mug. Another purchase went straight to DH to be wrapped up for Christmas, so that will have to remain untold for now.

I’m quite excited to have linen to knit with. The Mason-Dixon knitting books have patterns for linen, but I’ve never found any linen yarn before. I’m hoping it will be a summer top of some sort.

By far the most exciting thing happened on the way back to the car. We had heard rumours that Ysolda was at Yarndale and we found ourselves walking just behind her. As my friend was wearing a shawl made out of one of her kits, she turned round and noticed it. It was really nice to meet her in person and she even gamely agreed to have photos taken. 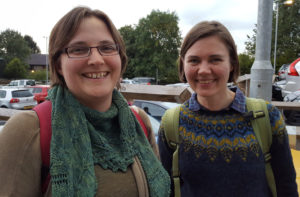