Rather than repeating the list of reading aims for the year each time, I have built a page that I can keep updated throughout the year.

There are probably more books that I have read or re-read since January, but I haven’t been keeping a very effective list. This is just what I can find from my various electronic devices and from looking around.

Borrowed from the library

My local library is closing for refurbishment in a week or two, after which it will reopen as a volunteer-run library. I overheard the librarian this afternoon explaining that she will shortly be out of a job. Such short-sighted policy from the government, taking so much local authority budget away that they have no choice but to cut library staff. It’s fine for our local town as there is a small army of active retired people there. I can foresee in other places it will be incredibly difficult to recruit enough volunteers. Plus, what does it say to people wanting to become professional librarians if it is implied that anyone can do this with willingness and a couple of hours training. The rate that our kids get through books, we would be stony broke if it wasn’t for the library. I like to think that my library fines, however small, are helping in some way to keep it going! Yes, that’s why I don’t take the books back on time, nothing to do with always forgetting to write down the due-date in my diary.

On my bedside table, but not started yet

Here’s a reminder of my 2017 knitting/fibre goals.

The year started very well, with finished projects flying off the needles throughout January. 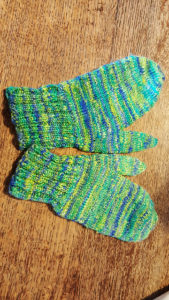 The silk mittens were completed and put into immediate use underneath the fingerless mitts I made last year. For cycling in winter, two layers of gloves are perfect. The silk mittens are quite rustic, as the gauge varies significantly depending on how thin I drafted the silk. If I were to make them again, I’d make the hand section smaller, as they feel a little loose. Having used the Knitters Handy Book of Patterns to make them, I was quite chuffed to get a comment from Ann Budd herself on my project page. 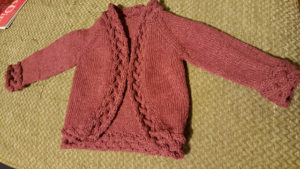 Next, I finally finished my god-daughter’s Christmas present, only a week or two late. It’s a cardigan/jacket knit in one piece, mostly plain stockinette, but with a sideways cabled border round the edge.  This gave me some good practice at grafting in pattern. I’ve since received several pictures of her wearing it, so it has obviously proved popular. The yarn is a cotton-wool mix that should be fairly hard-wearing. 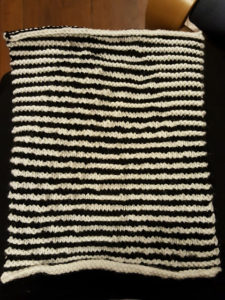 This next project was a first attempt at illusion knitting. The pattern appeared as one of the puzzle weeks that we take part in. Sadly, I was completely stumped by the puzzle, which you can find here, until the solution was revealed, but I decided to knit the mystery pattern anyway. I used some cheap acrylic black and white yarns that haven’t even made it onto Ravelry yet, despite being bought several years ago. 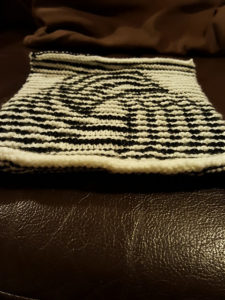 Oh the irony, when I discovered that I had knit the woolmark in a yarn that is against everything that trademark stands for.

As far as spinning goes, I’ve done a bit: turning a gorgeous braid of Merino, Shetland, Alpaca and Silk into some singles. Plying is next on the agenda. The yarn looks as if it is dark red, but it has lovely flecks of green in. I think it will end up looking heathered. I have spent today keeping my Ravelry stash up to date, but can’t really add much to the spinning records until the plying is done, when I can have a go at calculating wpi, grist etc. Perhaps one day this will be a hat.

My intention of learning brioche stitch is making progress, having cast on  a swatch and nailed the basics. It really is a lot easier than I was expecting (and much easier using two colours than it would be using one). I started to look at increases and decreases, then got bored because the swatch really will never be anything other than a swatch as I’m using up scraps of yarn. One of my online friends suggests making an object instead. She may be right. Anyway, it’s a step in the right direction.

I have looked at a few Craftsy classes. The other day I watched several hours on a day I was very tired indeed. It was Stephen West on Shawlscapes. Deliciously eccentric and I learned some interesting ideas for how to change the shape of shawls.

There may have been yarn buying going on.  Most for specific projects. T came to choose some yarn for a scarf and picked Stylecraft DK. Very cheap tastes! The Woosheeps gradient pack was, however, pure indulgence in a colourway called Gothling. I wonder what it will be.

As far as keeping up with my 2017 goals, I think I’ve made good progress with all of them. It would be nice to finish March with another finished item, but then I’ve cast on another new one today rather than pressing on.

Sock knitting progress has been mixed. I signed up for Sock Madness, but was defeated by the round 1 pattern, which consisted of half of every row being twisted stitches. It was an interesting fabric, but it met an end shortly after I realised I had misinterpreted the pattern and done all the gussets wrong. In the mean time, I’ve been gradually continuing with the Scrappies,  using up rainbow coloured scraps from my scrap box.  Using some of the Knitting Goddess yarn I got from the Harrogate Knitting and Stitching Show, I have started a shawl in some simple lace.

During February, I took part in an Instagram game, following yarn-related prompts each day. This got me to evaluate some of my WIPS and so I can admit that the Color Affection that I started with some gorgeous cashmere laceweight has gone to the frog pond. The colours did not have enough contrast for Color Affection so I need to find another use for them.