This evening I decided to tackle a new project, which has been queued up for 15 months. At Yarndale in 2014 I bought a scarf kit from the now sadly discontinued Natural Dye Studio to make a Plankton Scarf.
It’s a modular project, which fills the gap left by the epic sock yarn scarf, but using specific yarn, so not diminishing the sock yarn scraps in any way. This may become problematic at a later date, but is fine for now, (one can always buy bigger boxes).
The children very helpfully assisted in winding the yarn before bedtime, then I perused the pattern before jumping in and making the first motif.
There’s a couple of challenges:

The pattern is written for 8 colours, but the kit only contains 5, so there’s no compunction to follow the very detailed chart of colour options at the end of the pattern, but I’ll have to come up with my own colour design instead.

There’s one instruction that has me baffled, which is to do with the chain stitches at the beginning of the rounds. How do you “crochet chain stitches into a gap”? Chain stitches just are where they are as far as I’ve ever known. The intended effect seems to be anchoring the chain stitches slightly to the rear of where they would naturally form. More experimentation needed. My crochet tutor (aka Mum) is popping by for a visit tomorrow so I shall consult her and see what she says.

Anyway, I’ve got one finished motif with ends sewn in ready for blocking. 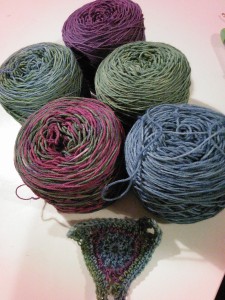 I think I’ve found an error in the written instructions, although the chart is correct. 9dcs on round 5 rather than 8.

Here’s the latest on the yellow and grey socks. They’ve been frogged once and I’m not sure whether they won’t succumb again, as I’m not overly impressed with the pooling on the leg. 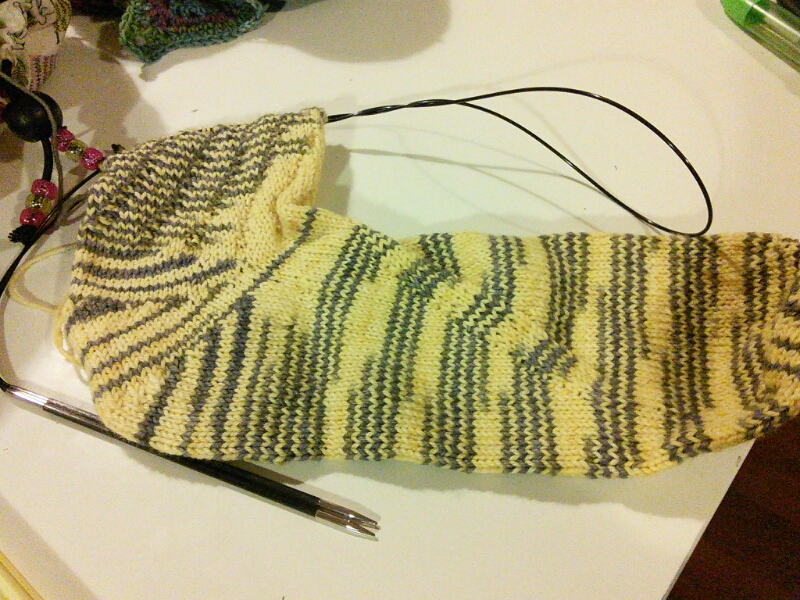 The blue and white sock is progressing nicely, albeit slowly. I’ve just tackled two colour purling for the heel flap. 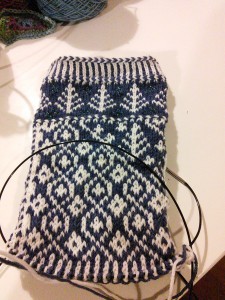 That’s all the active WIPs at the moment. There are inactive ones too, but they’ve made no progress since the last update.

2 Replies to “A little bit of WIP”