We’re getting towards the end of the week now. Today is all about gadgets – search for 4KCBWDAY6 for what other people have to say. (Today is also my birthday, so if my family are nice to me, there may be something more to report by the end of the day – do take a virtual piece of cake while you read.)

Write about your favourite knitting or crochet (or spinning, etc) tool. It can either be a tool directly involved in your craft (knitting needles or crochet hook) or something that makes your craft more pleasurable – be it a special lamp, or stitch markers.

Is it an item that you would recommend to others, and if so for which applications/tasks do you think it is most suited. Conversely, do you have a tool/accessory that you regret buying? Why does it not work for you?

Over the last few years, I have collected many different tools for knitting, all of which I would recommend.

Without question, the tools that make the biggest difference to my craft are my ball-winder and swift. I’ve had the ball-winder for some years, (although it appears I have never taken a photo of it and the light is too bad to take one now – go here and scroll all the way to the bottom of the page), bought the first time I went to the Knitting and Stitching Show from the Texere Yarns stand.

Before the ball-winder arrived, I had wound a couple of skeins into balls, but found it tricky, particularly the need to compel someone to remain on the sofa, holding a skein of yarn over their outstretched hands. After the ball-winder it was undoubtedly easier to wind skeins with the assistance of someone to hold the skein tight, but it could be done with some judiciously placed chairs instead if necessary. Still, nearly every skein ended up in a big knot at some point in the process. Even knowing that the knot must be a slip knot and therefore unravellable, doesn’t make it any less tedious.

Eventually, I bought a swift, a beautiful wooden one that collapses into a fairly small box. It is the Amish-design Wooden Yarn Swift from Chiaogoo. 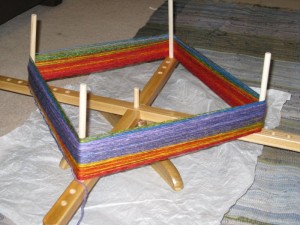 It is still fairly new, so doesn’t run as smoothly or easily as I would like, but it makes it very easy to wind yarn, with no other human required to hold it. I spend whole evenings with the swift and ball winder out, winding yarn in front of the tv. It works perfectly for thicker yarns, but for thinner yarns (sock and lace) I often have to tension it by hand to avoid it being wound too tight.

My son is now at the age where he thinks a ball winder is a wonderful toy and he can often be persuaded to turn the handle of the ball winder for me, with some encouragement and a reminder to stay at the same speed and winding in the same direction. You get some horrible snarls if you start going the other way and a loop of yarn catches in the cogs underneath.

Any knitting tools I regret buying? Just the very short (10 cm) sock needles I bought last autumn. I hold my needles in the gap between my thumbs and forefingers. The short needles just poke holes in the skin.

On the whole, I love knitting tools and I’m sure I will acquire more of them in the future. When it comes right down to it though, they are peripheral to the action of just sitting and knitting with good yarn and needles that feel right.

P.S. I took one of the pink socks to a work meeting on Thursday evening and was sitting there quite happily knitting my way up the lace chart when the cable of my circular needle caught on a button on my coat. I didn’t notice, reached out for something and then discovered I had neatly removed the needle from the stitches, depositing stitch markers in the darkness under the seat.

It all ended happily at home later that evening (I was able to grovel on the floor and find all the stitch markers) and I fixed the lace with only one round of tinking. Maybe I need to take simpler knitting to meetings.