Tomorrow sees the start of Knitting and Crochet Blog week but, before that gets under way, there are a few items to blog.

Remember the Woolly Wormhead hat workshop I went on a while back? Well, I finished the hat. It’s a beret with three spirals on it. The spirals rather pull the beret out of shape, but it’s a good basic hat. 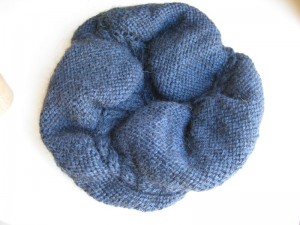 Blocked (while dry, put on a dinner plate; wet it and leave until dry) 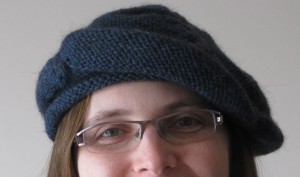 This is the first hat I’ve made that actually fits nicely round the crown. Thanks Woolly, for the handouts and the theory of hats.

The pink socks are coming along nicely, but you’ll be hearing more about that later in the week.

On the edge of the terrace, (not as grand as it sounds), in the back garden we’ve had a really long fence put up to stop the small children jumping off and injuring themselves. As soon as I saw it I thought that it had potential for displaying knitting. 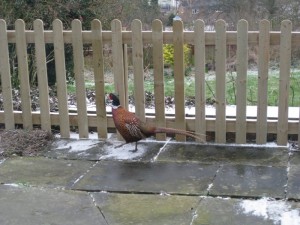 (We also have a visiting pheasant. I’ve named him Cedric.)

The new header is a first attempt at using the fence. I’m sure there will be more in the future.