I realised today that it has been nearly two weeks since I went to the knitting and stitching show at Harrogate. Time for a report. This has taken me all evening to write, so make the most of it. That was an evening of knitting I couldn’t really afford to miss since I have just 2 rows of the second sock for the husband’s Christmas present done. Working hours have gone fairly mental, so who knows when I’ll next get time.

I’ve never yet managed to take my intended route into Harrogate by car. You just get sucked in to a line of slow moving traffic that spits you out at the top of the steep hill with all the shops on, inevitably in the wrong lane.

On the way from the car park to the conference centre I found a lovely old-fashioned toy shop and completed my quest to find a rag doll for my daughter’s first birthday.

Once inside, I got the programme and spent a few minutes scanning it. My usual strategy is to circle all the exhibitors I want to see and plan an initial route. Nearly every knitting-related booth was in hall B so I spent the whole morning in there. My main purpose for the day was to find a skein of laceweight that I can make a really big shawl with. I had a no big purchases before lunch rule that was a wise decision. The only thing I bought was a set of stitch markers. 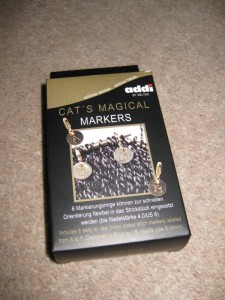 I love Cat Bordhi’s patterns, and she extols the virtues of using letter of the alphabet stitch markers. These are the ones she commissioned from Addi. I’ll let you know how they go.

Highlights of the morning included:

I met my mother-in-law and sister-in-law for lunch in the Royal Hall and we spent quite a while looking at the art installation called The Unfinishable. 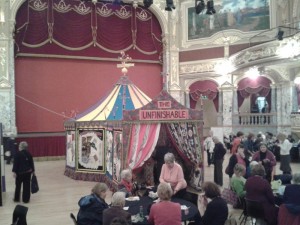 All around the outside of the tent are fastened various projects that have been donated by their owners. Walking around the outside we kept saying ‘I could finish that’ and wondering at the waste of all the materials. Inside are all the stories of how they got there and why they have been considered unfinishable. There are so many sad tales that I really began to appreciate the worth of this project and how it has removed (in some cases) decades of guilt from crafters.

After lunch I went back over my list, made decisions on what to buy and then went for a scout round the other halls to see if I had missed anything. Mostly, I hadn’t missed much. They really had corralled the knitters into hall B.

My favourite supplier from previous years, Artisan Yarns, was there with a whole rack of Smoothie Sock Yarn from Artists’ Palette Yarns.

While buying these matching skeins (next year I will have a pair of knee socks) I met the dyer of Smoothie Sock, who was pleased to hear that this is my absolute favourite sock yarn, particularly the semi-solids, since it doesn’t ever seem to pool and feels lovely running through the fingers on the way to the needles.

My quest for laceweight yarn was successful, although I won’t be able to blog it properly until after Christmas since my mother-in-law took it home with her to be wrapped up for my present. It was from Eden Cottage Yarns, a stall where I spent a good half hour of the morning. I was recognised by my scarf when I returned later in the day to make my purchase – always a good tip to wear something that knitters will remember, even if it does make for an uncomfortably hot day. I was wearing my Elektra.

At this point I thought I was done and so I was aimlessly wandering the halls when a magic word caught my eye: Malabrigo.

Every year I splash out on one (well I try to limit it to one) skein of yarn that is so beautiful, either to touch or look at, that it simply screams *BUY ME*. This was it this year. No way is this going to be socks. I think another scarf/stole/shawl type item is required.

That was the end of my buying, coming in £1.75 over my estimated budget. I can’t really explain this next photo. 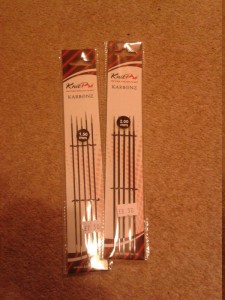 Knit Pro Karbonz in the wild. I think the day had got to me.

I understand the 2mm needles; the 2mm dpns in my harmony set feel really flimsy and I’ve never dared knit with them. What on earth am I going to knit with 1.5mm dpns? Does the world of teeny tiny dolls clothes in cobweb weight beckon?

Every year, I look out for the next sock knitting gimmick. One year it was Zauberballs, another year sock yarn with the two strands wound together onto a rolling dispenser. I didn’t find it this year (or was that the Karbonz?), but the amount of fibre (as in tops or un-spun fleece) was definitely on the increase. I predict a surge in hand-spinning and I’m happy to jump on that bandwagon. Moving back to near York should mean I can investigate the spinning guild there. Just need a spindle.

I met the family again for a coffee next to the knitted village for a final show and tell. (My mother-in-law bought nothing all day, except the things she purloined from our bags to be kept for Christmas. Serious strength of character there.) 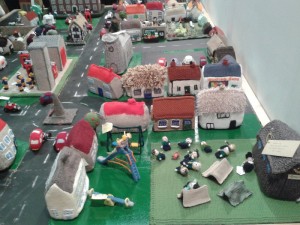 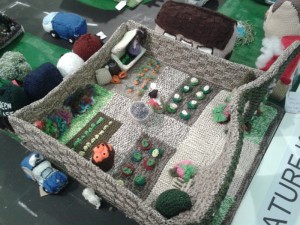 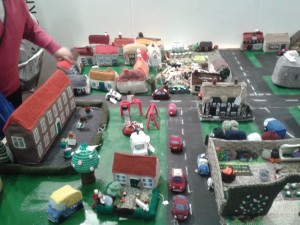 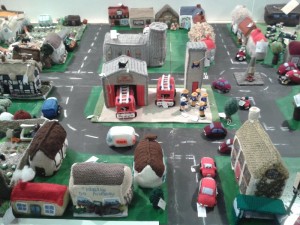 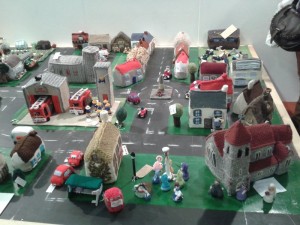 There were a LOT of churches for such a small village. In fact, an extremely good selection of amenities altogether. Charming.

I left Harrogate, following the only road that the traffic signs appeared to allow, heading out of the town centre. This turned out to be the A59 towards Skipton. This is entirely the wrong direction. After several miles of detours and small country roads, I eventually found myself back on the A59 to York and I wended my way home.