Since I last posted, I have mostly been knitting away on Elektra, which is now completed and sitting on the blocking board.

The pattern starts with a cast-on of just over 100 stitches, increasing to a total of around 450 per row by the end. The yardage in the pattern was slightly more than in the skein I was using, and there was an option of doing one less repeat of chart B if there was any doubt of whether the yarn would be enough.

The question became how to decide whether there would be enough yarn, since the decision needed to be made quite near the beginning of the pattern. I put together a spreadsheet with the stitch count for each row and worked out that at the point of decision I needed 72.76% of the yarn left to do the full number of repeats or 68.65% to do one repeat less. I knew the yarn was around 100g (probably a bit more, but I didn’t weigh it to begin with) and I had 78g left at that point – looked promising, so I did the extra repeat.

The pattern was a real pleasure to knit – mostly garter stitch, but with enough lace sections in the main part to make it interesting, then a lace border.

With four rows to go, it was looking a bit touch and go as to whether there would be enough yarn.

There wasn’t. Despite all the calculations, there were only 2 yards left when I got to the bind-off row, so I ended up with a contrast bind-off.

I would have liked blue, but didn’t have quite the right one. 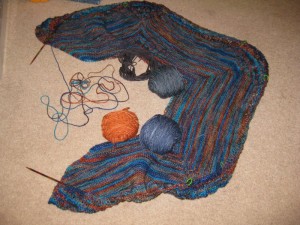 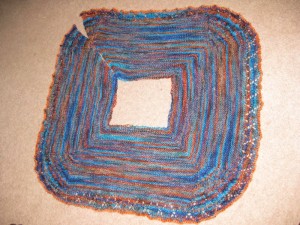