As promised, here are the knitting quotes from Little Women. They are taken from the Kindle edition, which also contains Good Wives in the same volume.

The first one, from the very beginning: page 4

It’s bad enough to be a girl, anyway, when I like boy’s games and work and manners! I can’t get over my disappointment in not being a boy. And it’s worse than ever now, for I’m dying to go and fight with Papa. And I can only stay home and knit, like a poky old woman!” And Jo shook the blue army sock till the needles rattled like castanets, and her ball bounded across the room.

Knitting is used here as a way of establishing Jo’s character. Disappointing use of the knitting is for old women stereotype.

Now one about Beth (the good one) knitting socks: page 13

Beth said nothing, but wiped away her tears with the blue army sock and began to knit with all her might, losing no time in doing the duty that lay nearest her, while she resolved in her quiet little soul to be all that Father hoped to find her when the year brought round the happy coming home.

What a contrast between Beth and Jo. Is knitting with all ones might more effective, I wonder?

“Then you may come, and I’ll teach you to knit as the Scotchmen do. There’s a demand for socks just now,” added Jo, waving hers like a big blue worsted banner as they parted at the gate.

I wonder what ‘worsted’ means in this context. Can it mean the weight of yarn, as used currently? Seems unlikely for socks, since they would be rather bulky and impractical for Army use. Maybe it is referring to the spinning method. Any ideas?

And finally a longer quote from right at the end of Good Wives: page 329

But Jo had her own eyes to take care of, and feeling that they could not be trusted, she prudently kept them on the little sock she was knitting, like a model maiden aunt. A stealthy glance now and then refreshed her like sips of fresh water after a dusty walk, for the sidelong peeps showed her several propitious omens. Mr. Bhaer’s face had lost the absent-minded expression, and looked all alive with interest in the present moment, actually young and handsome, she thought, forgetting to compare him with Laurie, as she usually did strange men, to their great detriment. Then he seemed quite inspired, though the burial customs of the ancients, to which the conversation had strayed, might not be considered an exhilarating topic. Jo quite glowed with triumph when Teddy got quenched in an argument, and thought to herself, as she watched her father’s absorbed face, “How he would enjoy having such a man as my Professor to talk with every day!” Lastly, Mr. Bhaer was dressed in a new suit of black, which made him look more like a gentleman than ever. His bushy hair had been cut and smoothly brushed, but didn’t stay in order long, for in exciting moments, he rumpled it up in the droll way he used to do, and Jo liked it rampantly erect better than flat, because she thought it gave his fine forehead a Jove-like aspect. Poor Jo, how she did glorify that plain man, as she sat knitting away so quietly, yet letting nothing escape her, not even the fact that Mr. Bhaer actually had gold sleeve-buttons in his immaculate wristbands. “Dear old fellow! He couldn’t have got himself up with more care if he’d been going a-wooing,” said Jo to herself, and then a sudden thought born of the words made her blush so dreadfully that she had to drop her ball, and go down after it to hide her face. The maneuver did not succeed as well as she expected, however, for though just in the act of setting fire to a funeral pyre, the Professor dropped his torch, metaphorically speaking, and made a dive after the little blue ball.

What a contrast in Jo’s attitude from the beginning of the book. Love the idea of knitting being used to hide inconvenient facial expressions. Similar to the trick of bending down to pick up a pen to avoid falling asleep during boring lectures.

In other news: the cardigan is still not dry. Maybe I shouldn’t have wet it quite so thoroughly. 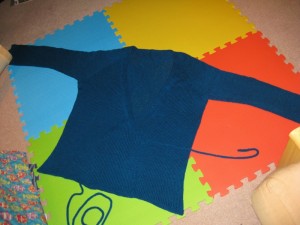 The cardigan is finished!

Shoddy photo, but I forgot to take it while there was still daylight. I must find some tips for taking better photos of knitting. Those blocking boards don’t help with the colour, although they do help to keep the carpet clear of blue dye. The Cascade 220 bleeds colour quite spectacularly.

I’m very much looking forward to wearing this when it dries.

Now back to that sock. Hopefully I can finish it by Thursday when my next parcel of sock yarn arrives.

One of the things I’ve been meaning to do on this blog is to keep a note of mentions of knitting in the books I’m reading. I have some delightful quotes to share from Little Women and Good Wives. Next time.

It turns out that sleeves are very straightforward. I’m on to the second sleeve and just needing to find the time to chug on through 110-ish rows. Really starting to look forward to wearing it now.

In other news, we managed to visit a yarn shop today: Poppy’s on Colliergate in York. I had plans to buy some Noro Kureyon so I could make a Lanesplitter skirt*, but I was stymied by a combination of not enough of any one colourway available and a small boy’s need for a wee. Another time perhaps.

* If there is a bandwagon to jump on, I’m there

The sleeves of the cardigan are growing. It looks as though one ball per sleeve will be sufficient, so no faffing about with dye-lot changing.

This week I am reading:

I am contemplating giving up shouting at the 3yo for Lent, imposing a 10p charity fine for each lapse. 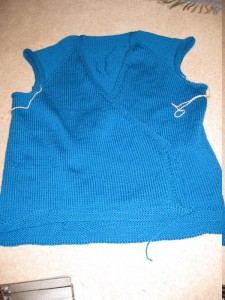 I’ve already mentioned that the Neckdown Wrap Cardigan is my first adult-sized cardigan. I expected that there would be a fairly steep learning curve, but didn’t realise quite how that would manifest itself.

Some people read instructions, others prefer to wing it. Some people treat instructions as a prescriptive method to follow, for others they are mere guidelines to be interpreted or ignored according to whimsy. When it comes to knitting, I read instructions, and almost invariably follow them slavishly. When I started knitting this cardigan I read the instructions, bought the two extra sets of dpns that I would need and went through the pattern circling all the numbers applicable to my size. I also highlighted a couple of other instructions that I thought I might miss. I know. Sorry about that.

Yesterday I picked up, as planned, the 214 stitches for the neckband and merrily knit the two garter ridges. As I put the knitting away at the end of the evening I was happy in the knowledge that this morning I only needed to cast off the stitches and the neckband would be done. When I got it out this morning, the neckband looked a bit rubbish. I checked the pattern numbers. Yes, I had picked up the right number of stitches, I had knit the correct number of rows. Just one small problem – I had ignored the instruction (clearly circled in the pattern by me) ‘using the smaller needles’.

On a not un-related subject, today I have been inserting a lifeline, ripping 4 rows back and re-knitting. It looks much better now, particularly since I made the neckband a bit wider as in the photo on the pattern.

In the next exciting instalment: sleeves.

From the Guardian February 1961 (Via Knitty)

The urge to knit is surely the most moral force in the world. Knitting is industrious, economical, virtuous, therapeutic, mildly creative and above all tranquillising. Research would show that knitting wives never become nervous wrecks and that it is never knitting girls who break up happy homes. Conversely it would be found that the Other Woman never knits.

How times change. For me knitting is leisurely, expensive and slightly indulgent rather than industrious, economical and virtuous. I would agree with it being therapeutic and creative. Tranquillising is an interesting word to use and perhaps there is a grain of truth in it, but I don’t really like it. Perhaps soothing and relaxing is a better way to put it, although not when figuring out where a lace pattern has gone wrong or doing rows of twisted rib or trying to p2togtbl.

Anyway, I’ve reached the bottom edging on the cardigan. I’m intending to try picking up round the neckband this evening while watching the first Twilight film. I loved the books, so I’m hoping for a good adaptation.

Yes. More long, long rows of cardigan. Only a few more rows to go, then the sleeves and the edging. The next decision will be how to mask the change in dye-lot for the last two skeins.

There’s a new book on my wishlist: The Principles of Knitting by June Hemmons Hiatt. I’ve heard that the first edition is a bit of a classic that has been hard to source for ages. The second edition was published yesterday and has been thoroughly updated. I can’t decide whether to get it for the Kindle or as a hardback. It is about 900 pages so would be a bit of a doorstop.

Back to the second of the Pot Pourri Socks now. I’m moving slowly down the leg, thanks to a weekend away where it really wasn’t practical to fit the cardigan in the car, not without leaving one of the children behind anyway. 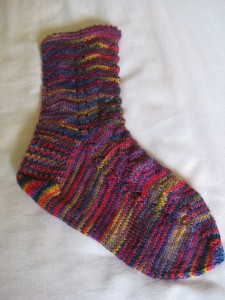 Looking at what I’m knitting at the moment, you might be forgiven for thinking that knitting bores me and is a chore. Far from it, in the last few years I’ve found knitting to be more interesting than I ever thought possible. One of the reasons for writing here is to keep a note of all the new and interesting things I come across. Still, there is no getting away from the fact that I am currently on a drive to finish up old works in progress (WIPs) and there isn’t a whole lot that is thrilling about that.

Welcome to the beginning of this blog.

I’ve been thinking recently that I wanted somewhere to write about knitting in more detail than most of my Facebook friends might appreciate, and at greater length than Twitter allows. The result of this train of thought is this blog, so I hope you enjoy reading.

Here is a brief overview of current knitting activities: